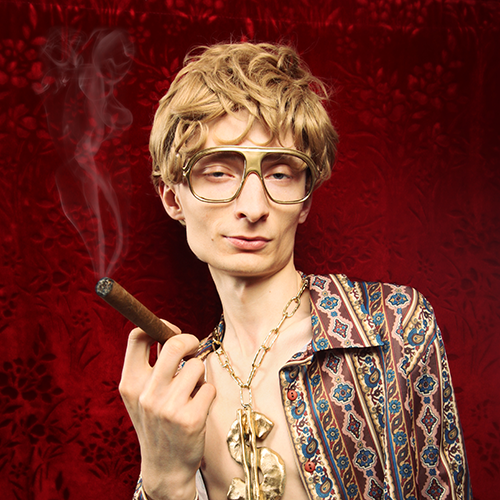 He's been called "The Crassiest Man in Cascadia". He's been accused of sexual harrassment. He's been sued 14 times in the last six months alone. He's been accused of exploiting his contractors. He's had shit flung at him from protestors. He's created a multi-billion Sovereign transportation company from the ground up. He's been written about all over the press for years, but he's never sat down with the editors of Filthy Lucre--until now. Get ready to meet Tyrstyn Calachick, the balls-out Executive Officer of Majestic.

FL: Thanks for joining us, Trystyn.

TC: Thanks for rescheduling for after 4pm. I just can't do early mornings.

TC: Every night I look for the baddest bitches I can find around the world and fly them in for all night drug-fueled sex parties. Usually the DJ goes home around 8am and I don't usually get to sleep until around 10am. 4pm is actually really early for me, but I'm willing to do anything to meet with the editors of Filthy Lucre. You assholes are my favorites humans.

FL: Well, we've been a fan of yours for a long time, too.

FL: You've managed to build up your business from nothing to a seriously lucrative enterprise... what's your #1 secret?

TC: I live on a diet that consists almost entirely of 5 key ingredients: crickets, kale, figs, duck eggs, and vodka. This diet gives me the superior strength and mental acuity necessary to completely and unmercifully destroy my enemies.

FL: Speaking of enemies, would you like to say anything about Eiden Weller?

TC: His head is mounted on the wall of my office. Taking his company down and then putting him on that desert island so I could hunt him for sport--that was one of the best feelings of my life. It felt almost as good as having his wife lick my balls.

FL: Do you have any regrets?

TC: I don't regret anything I've ever done. If I do something it's because I want to do it and because it's what should be done. Regrets are a concept created by the weak to explain away their inaction when the reality is they're just hapless, helpless eunichs.

FL: Is there a piece of advice you'd give aspiring entrepreneurs out there?

TC: Don't listen to anybody who tells you you're wrong about something. Chances are they don't know shit and they definitely don't know your shit better than you. In fact, asking advice at all is for eunichs. Real swinging dicks don't need advice. They know exactly how it should be and they know exactly how to get it there and they don't give two fucks if people stand in their way. That's the only piece of advice you need out of life.