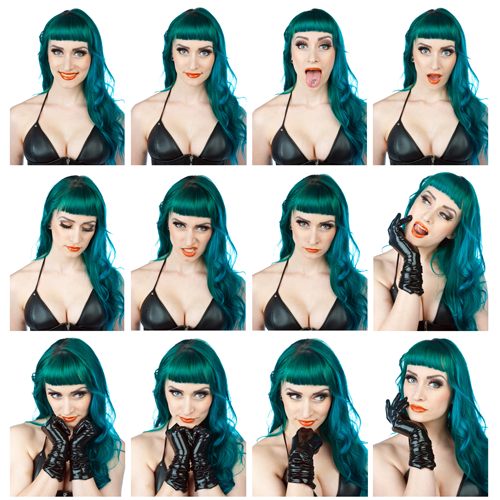 She burst onto the music scene when she was just fourteen years old, appearing on the hit Empire Media show So You Think You Don't Suck At Singing, and wowing both the judges and audiences who voted her back week and week to make her the winner, on her fifteenth birthday, of the entire competition. She has gone on to make 7 Titanium albums each themed with a different personality--or rather a different part of her own personality. A master of self-promotion, Allissonn Starr is not just another singer and musician, she's a cultural force that blows the doors off any room she walks into. She took some time out of her busy schedule to speak with us.

FL: We are so excited to finally meet you.

AS: Well, thank you. I'm excited to be here.

FL: We have to admit that we're unabashed fans of your music around here.

AS: Thank you. I always love hearing from fans.

FL: You've evolved a lot since you first began your career.

AS: Well, I was just fourteen when I started, so yeah, I've grown up a lot.

FL: Each album you've put out you've said reflects a different part of your personality.

AS: Yeah, that's right. I tried to get in touch with different feelings and emotions for each record to express different parts of myself.

FL: Tell us about your latest record.

AS: This record came out of a lot of the rage I was feeling after my last record came out. People really seemed to try to make me out to be something I wasn't and that really pissed me off. I felt a lot of rage. I bought a punching bag and installed it in my living room and I used to bash at it for hours. I punched my hands bloody one night and ended up in the hospital. So this record is driven by rage. Rage at the world. Rage at myself. Rage at my lovers. Rage at all the fecking idiots in the world. It's my rage record and it comes out in the sound. Screaming guitars. Heavy drum beats. Screeching lyrical assults on those around me that I perceive as morons or sent to keep me down.

FL: Your last record was infamous not only for its content, all about your passionate and unconventional love life, but also for the cover.

AS: Yeah, it was like nobody had ever seen a naked woman with a guitar coming out of her vagina before.

FL: You took a lot of criticism for the lifestyle you advocate on the record.

FL: Do you regret sharing your body with anybody?

AS: Mostly, no. I mean, I've had sexual experiences that weren't exactly in my top ten list, but for me sex is about making a connection with somebody that's a deep and incredibly primal, natural connection. Have I had bad sex? Yes, definitely. Have I had sex I regret? No, I don't think I have.